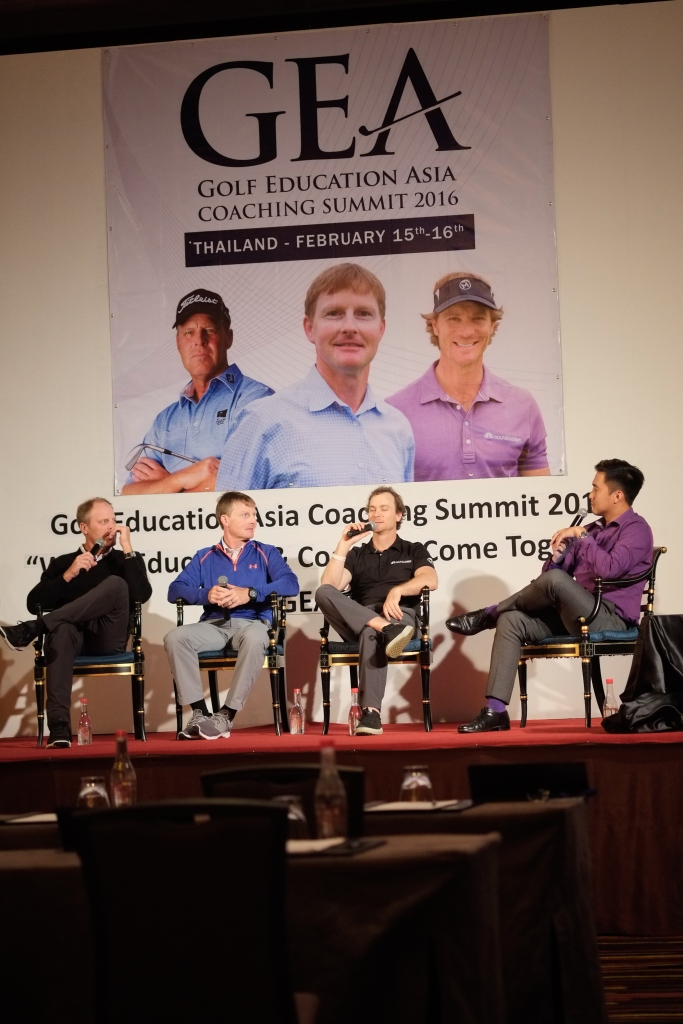 Last February, I had the privilege of attending the 2016 Golf Education Asia Coaching Summit in Bangkok, Thailand. The speakers in the two-day event were Jeff Ritter, James Sieckmann and Cameron McCormick.

Jeff Ritter is a Golf Digest top ranked teacher and a Golf Channel on-air talent. James Sieckmann is a short game specialist who has coached players from the PGA, LPGA and Champions tours. Cameron McCormick is the long-time coach of current world #1 golfer Jordan Spieth and the 2015 American PGA Teacher of the Year.

Over 100 coaches from 20 different countries attended the seminar. At first I was hesitant to go because of the cost. I was pleasantly surprised that a lot of the views presented in the seminar confirmed my own beliefs in terms of where the industry is going. If only for that validation, the sacrifice was worth it. Of course, the experience also revealed a lot of areas where I need to make adjustments as a coach.

Obviously, I can’t share everything here. But I do hope that you can pick up a few things that can help you improve your game

Many teachers insist that before you can get better, you have to get worse. Not Ritter. He demonstrated that with the proper use of video, a golfer can and should be able to improve immediately. The key is to identify patterns. Contrary to popular belief, there are very few absolutes in the golf swing. What many teachers commonly refer to as fundamentals are actually variables.

Among the three speakers, Ritter was the one I could identify with most in terms of teaching style as well as personal background. He believes in modelling the opposite of an error to a student in order to fix it. In the first place, a student is already thinking of the correct model when he develops an error. So why continue showing him that same model?

He uses the language of “different”, not “better”. He reminded everyone to never underestimate the power of simplicity, and the influence that coaches have on the lives of students off the course.

Of the three speakers, Sieckmann was the only one who came close to having a system or method. He was also the only one brave enough to hit balls into the audience inside the ballroom of The Landmark Hotel. He explained how the kinematic sequence as well as radar measurements (path, face angle, etc) change as you get closer to the green.

He believes that performance at the highest level is subconscious. By setting aside enough time for random training and games, a student learns from his mistakes and ultimately develops the ability to coach himself. He admitted that despite all the empirical data at his disposal, his training aids have remained simple, mostly consisting of a stick, a towel and a coin.

At one point in the seminar, he asked for a volunteer who has chipping yips and demonstrated how external focus is superior to internal focus when dealing with this kind of problem. Perhaps the most striking statement he made was this: If you’re only fixing poor outcomes instead of fixing poor insights, you’re not a very good coach.

Easily the most cerebral of the bunch, McCormick provided the most in-depth look into the psychology of learning. You could actually sense the frustration of the non-English speaking segment of the audience because of his professor-like approach. His views can be summarized into this: Not all solutions are form-based. In fact, I can’t remember him mentioning anything about his preference in terms of swing mechanics.

One of the highlights of his presentation was when he asked the audience to analyze the video of a young golfer. This golfer had a bad setup, bad backswing, bad everything. The ball looked like it took off 30 degrees to the right. Then McCormick asked: “Who among you thinks he shot over 90?” A few raised their hands. “Who thinks he shot in the 80s?” Half the room raised their hands. “70s?” A couple of hands. Later on, he revealed that the young golfer was Jordan Spieth at 12. He had just shot 62 at the time the video was recorded.

McCormick emphasized the importance of statistical analysis and post-event debriefing. This helps a student focus only on elements that actually need adjustment. He makes sure he has a “finger on the pulse” of his students through the use of different apps. This way, students can continue improving even if they don’t see him regularly.

At the end of the day, skills trump style. Training therefore should be aligned to challenging your current skill level. He calls it “repetition without repetition”. Practice should involve positive stress and adversity ramps in order to amplify transfer of skills to competitive play.

All three speakers were very generous with their time during breaks. I took every opportunity to speak to them about topics they did not discuss on stage. All of them are voracious readers. Despite their success, they never stop investing emotionally in their craft. They learn from other teachers, and not necessarily from the field of golf. Sieckmann, for instance, confessed at the end of the seminar that he had 7 pages of notes (more than I did)… even though he was one of the speakers.

One word that keeps popping up during the seminar was “awareness”. Before you can change anything, you need to know where you are. Understandably, they all use technologies like radar for feedback.

They all agree that the right mindset is more important than talent. Growth, not perfection. Learn to value the journey to mastery more than the destination.